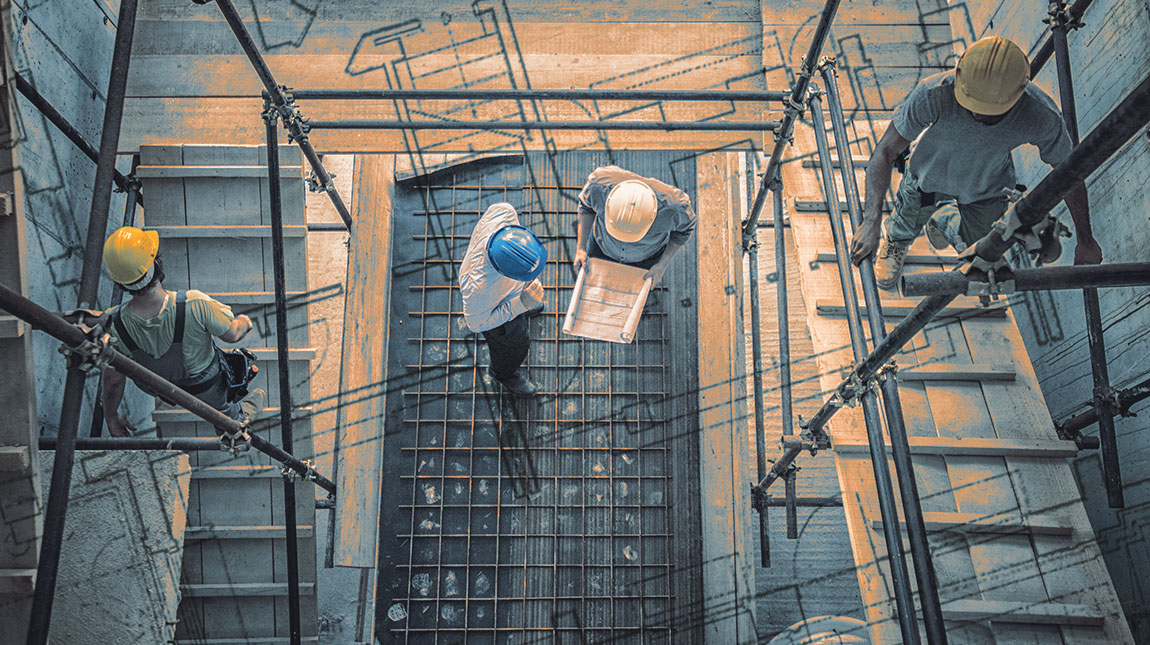 Tucked away in San Jose, CA sits a monstrosity of a home that took 38 years to construct.

The house, nicknamed the Winchester Mystery House, is known not just for its size, but for the fact that there was no master plan for its construction.

Driven by whatever particular whim of the day moved her, the owner, Sarah Winchester, haphazardly added on one section after another until at the time of her death there were 161 awkwardly placed rooms.

In 1 Corinthians 3, the Apostle Paul, himself an expert builder, admonishes us to be very careful how we build.

The foundation of our lives and ministries is to be none other than Jesus Christ. And as we build, we should do so by faith, strategically, and with great intention.

I find that many ministries today are driven by pragmatism, comparison to other ministries, and the reactive whims of the current leadership.

Instead of a master plan reflecting the Scriptures and imparted by the Master Himself, many ministries today seem to look a bit like the Winchester Mystery House.

What are irreducible minimums?

“Hey, what are your irreducible minimums as you open your first ministry at Arizona?” asked my veteran Navigator staff friend.

“Irreduci…mina…what the heck is he talking about?” I thought to myself. Was he asking about what insurance I had for my ministry?

Before I could muster some type of response, my friend, clearly tipped off by the confused look on my face, followed up with, “There are a hundred different focuses your ministry could major on. So you know, what are the components that if nothing else happens, these have to emerge in your students’ lives?”

My friend’s question couldn’t have come at a better time.

I had just finished six intense years of staff in training with the Navigators and I was about to pioneer my first campus at the University of Arizona.

I had amazing training, a clear calling from the Lord, an enormous drive, and loads of faith. But I knew that the Lord would not want me to simply reproduce the strategies I had learned at the previous campuses where I had trained.

Knowing myself as being one with endless ideas, I realized if there are a hundred things a ministry could focus on, I could easily come up with another hundred. But one of the things the Lord had put on my heart was to not have a ministry “born the natural way,” but rather “one born by faith.”

My friend’s question was so timely because it revealed to me my need to focus on a small number of goals for my ministry, and the need to make sure that those things were areas of focus that the Lord had prompted me to implement by faith.

Developing irreducible minimums for my ministry proved to be an indispensable practice that has both been a safeguard as well as provided a master plan by which the three campus ministries I’ve planted since that time would be built.

How many do we need?

I have chosen to limit our irreducible minimums to a dozen or less.

Once my staff, student leaders, and I have, by faith and countless hours of strategic discussions and prayer, determined them, we see to it that almost every facet of the ministry is driven by these twelve ideas.

We often refer to each irreducible minimum as a plate. Most dinner tables don’t have room for more than twelve plates.

Similarly, I find that if done well, most ministries cannot handle more than about a dozen key components that they impart well into students’ lives.

Inevitably, I, my staff, or a student will get incredibly excited about some new thing we must do in our ministry.

Most of the time, we conclude that while the new idea is fun or exciting, it doesn’t really fit with the Master’s plan that we believe He has given us to build.

And I find that while there is sometimes disappointment in the death of the new idea, by reviewing and weighing each of our original plates, it often points us to true north and breathes fresh life into them.

You’ve heard it said to build with the end in mind. Taking the time to develop a set of irreducible minimums will help you in building a ministry that reflects the ultimate characteristics that you long to see imparted in your students’ lives.

As you develop your irreducible minimums, here are some thoughts to keep in mind:

Your irreducible minimums are not a mission statement

I find that the only people who get excited talking about mission statements are the people who wrote them. The same is true with irreducible minimums.

Rather than talking about them all the time, simply implement them and let them drive your ministry. Your students will know what they are.

After our third year at Arizona, one summer before we started our fall launch, I decided to do an experiment with our student leaders.

I asked them if there were only twelve things we could help the incoming freshmen with during their time in college, what would they be?

As they shouted out different ideas, I wrote on the whiteboard.

Then, I said, “Now reach under your chair.” I had placed a list of our irreducible minimums under their chairs. The lists were mirror images of one another.

It was like that scene in Karate Kid when Daniel realizes that everything he was learning was intentional and had a very specific purpose.

Your irreducible minimums should be shaped by God

Do you want an ordinary ministry? Of course not! If it is to be extra-ordinary, it must be born of the Spirit. This means you and your staff and student leaders intently seeking God and listening for His direction.

In Jeremiah 23, God talks of Israel’s spiritual leaders who just traded ideas from one another and said it was of the Lord. You see God’s heart in this chapter for His leaders.

Amos 3:7 says, “Surely the Sovereign Lord does nothing without revealing His plan to His servants the prophets.”

Are you listening for HIS plan? Are you willing to give up yours?

If you are to be a man or woman after God’s own heart like David, that will be evidenced by you listening carefully to Him and doing whatever He asks of you.

While your ministry will likely reflect your training and still incorporate your dreams and ideas, it may be that like Abraham did with Isaac, God would have you hold each of those with an open hand.

Last year I entered our campus ministry into a partnership with a local church that on paper would not necessarily have made sense.

The senior pastor and I spent months negotiating this potential partnership, only to have one or the other of us decide to close the book on the idea at least weekly.

It wasn’t that we didn’t want it; rather, it just seemed that there were too many reasons that a partnership wasn’t practical or seemed to raise too many potential complications.

However, as we continued to pray, fast, and seek the Lord on this together, eventually we agreed that every time we “closed the book” we would walk back in the room and see the Lord had blown the page back open to this idea of us partnering.

In time, we both felt confident that while there were many unknowns, that we would rather follow the Lord into what we were certain He was inviting us into than to harden our hearts and just do what seemed easy.

While that partnership has had a few difficulties, I cannot tell you what an amazing provision and encouragement it has been for both of us in so many ways.

Is the point to link up your campus ministry with a local church? No! Though perhaps that would be great.

The point is this was an idea that the Lord hadn’t led me to do before, but as I sought Him it became clear that this idea had its origin in His heart and was something He wanted us to do.

Your irreducible minimums should be specific to your campus

Are there some attributes that your campus embodies?

Your irreducible minimums should be consistent with the Scriptures

I would suggest that they should fall in line with the primary themes of the Scriptures rather than an isolated incident or single verse.

For example, at the University of Oklahoma where I now serve, a heart for the nations is one of our irreducible minimums.

You cannot read the entirety of the Bible and not see this as one of the primary themes on God’s heart.

On the contrary, while accountability is a concept in the Word and is important, it’s not a primary theme and would not make for a key pillar upon which your ministry should be built.

Your irreducible minimums should be consistent with your sending organization

While different ministries give varying degrees of autonomy to run your ministry however you want, your irreducible minimums should line up with the culture, values, and mission statement of the ministry you represent.

For example, if your ministry has a strong value of initiative evangelism and you make insider evangelism one of your irreducible minimums, you might reconsider this plate, or evaluate whether you are with the right sending organization.

Your irreducible minimums should drive all that you do

They should be revisited by your staff team at least a few times per semester.

Once a year, my staff team and I will evaluate our ministry based on our irreducible minimums.

We will look at the different vehicles we have for accomplishing each of them and assess whether that vehicle is still effective.

Some plates are best accomplished in one-to-ones. For example, we have found that Scripture memory is best imparted from one person to another rather than in a large group setting.

Another would be evangelism. Our students who really pick up the heart, vision, and know-how to do evangelism well almost always have a staff or an older student model evangelism with them multiple times one-on-one.

We have found that identity on the other hand seems to be best imparted through our courses on Biblical manhood and womanhood.

Almost all of our large group meetings usually relate to one of our irreducible minimums.

That may sound pretty limiting, but I assure you it’s not. And just when you think you are being redundant on a topic is likely when your students are starting to get it.

For example, one of our irreducible minimums is prayer. I could have ten different speakers come in and give a talk on prayer and they would all be different, and likely all be great.

Let’s look to God to help us build ministries that will shape the next generation into skillful laborers, useful to the Master!